This was “a good loss”. For a while there it looked like the Knicks would win this one. We are getting to that time of year when the Knicks win 3 of their last 6 or so games to screw up their lottery odds. But saner heads and Terrence Ross prevailed, and the Knicks remain 2.5 ahead of Phoenix (and 4 ahead of Cleveland) for the top lottery spot with 4 games left.

What Top Lottery Spot means is that the Knicks do not walk into the lottery with a 20 percent chance of the #6 pick, and a 33% chance of the #6 or #7 pick. They are guaranteed no lower than the #5 pick. It’s not much, but it’s all we’ve got. And in what some are calling ‘not a deep draft’ that could be significant. Remember Stephen Curry (whom the Knicks wanted but Golden State took with the #7 pick while Knicks had #8 pick) or Russell Westbrook (whom the Knicks wanted but Oklahoma took with the #4 pick while Knicks had the #6 pick). 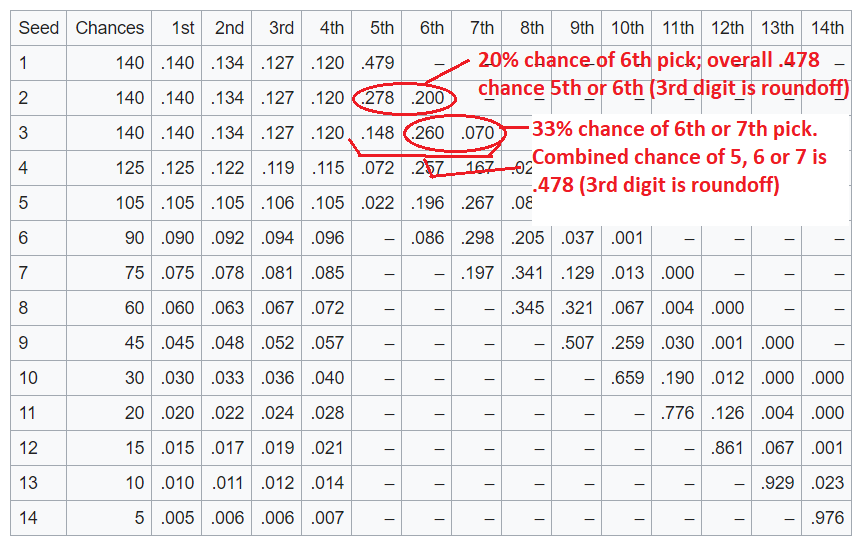 Knicks jumped out to an early 24-16 lead in this one, before Orlando came back and tied the game in the 1st quarter and took a commanding lead by end of the second quarter on the play of Aaron Gordon, Evan Fournier, and Michael Carter-Williams (23 points with 5-10 from 3) especially. Orlando was up 58-45 at the half. But the Knicks hung tough and pulled to within 2 points near the end of the 3rd quarter, based on the terrific night that Mario Hezonja was having. Plus Kevin Knox.

Enter Terrence Ross, who came off the bench to hit 3 straight 3’s in the final minute of the 3rd quarter to put Orlando back up by 11. Knicks hung around a little bit, pulling to within 7 early in the 4th — creating ojeda for Knick fans watching who DID NOT WANT A WIN. But again, saner head prevailed; that was as close as the Knicks got.

At this point in the season, what matters to Knicks fans is not winning but how well the players are doing. The key players that could shape the Knicks future. In other words, Kevin Knox. We already know:

And Knox looked Great last night. He is the Knicks best 3-pt shooter — it is one of his key strengths — ability to shoot off the pass with no hesitation with a beautiful high-arcing, and accurate 3-pt shot. And if he’s not shooting the 3, he’s attacking the basket. He’s a legit 6’10 maybe 6’11 and growing. He’s 19. He has to improve his handle and finishes at the rim, and his defense. Last night his drives were strong and accurate. He looked good.

Hezonja’s Day in the Sun

Mario Hezonja had a terrific game. Before the game, it was reported that the Knicks Coach David Fizdale was going to ‘keep a promise’ to start him in his former home Orlando. Hezonja tweeted before the game that “I still have a lot of messages, a lot of texts on my Twitter feed full of Magic fans. So I want to thank them for everything for their support. Now that I’m on another team, they’re still supporting me. It means a lot to me.”

🔙 where it all began with 2️⃣9️⃣ pic.twitter.com/YlEzPAHlGK

Which begs the question — why didn’t he do this all year???

Mitchell Robinson had a nice game — 6-9 for 12 points, 9 rebounds, 3 steals, and 2 blocks (one credited after the game when they switched a steal to a block) in 34 minutes. But he had trouble with Nikola Vucevic who pounded him inside for 29 points on 11-21 shooting, 13 rebounds and 3 assists in 33 minutes. Often Vucevic got inside position on Robinson; some of this a consequence of Robinson being so active on defense — patrolling the paint out to the 3-pt line; some of it because Vucevic is wiley. Going into the future this will be something Robinson will need to figure out — there is always a tradeoff, and in this case blocks of 3-pt shots create openings inside; and Robinson’s height-weight ratio which enables him to be so athletic, also allows him to be pushed a bit inside (although he is quite good at holding his position). If Robinson gains muscle weight, he might lose some of the athletic-ness. We’ll see.

This was Billy Garrett Jr’s first game as a Knick. He had 4 pts. Unlike the previous game where only 8 Knicks played, Fizdale emptied the bench in this one. Henry Ellenson, Luke Kornett, Lance Thomas, and John Jenkins all got minutes off the bench. Damyean Dotson started and had 7 pts (1-4 from 3 where he is streaky). Frank Ntilikina, Allonzo Trier, Dennis Smith Jr, and Noah Vonleh continued to be injured.

Besides Aaron Gordon, Evan Fournier, Michael Carter-Williams and Terrence Ross, Orlando was helped by. Jonathan Isaac, DJ Augustin, Wes Iwundu, and Khem Birch. With the win, Orlando is 39-40, tied with Brooklyn for the 7th spot in the playoff race, with the top 8 making it. Good for them.

Easy win. And just like that the 18-game losing streak came to an end. In Atlanta. That’s how bad Atlanta is. That’s how good the Knicks are. Very secretly on this team there is talent. […]

Martin Luther King Day at Madison Square Garden — if you got into your seats late after buying popcorn and a foot long hot dog — the game was over. Oklahoma City destroyed the Knicks […]

The Knicks ended the season with a MASSIVE THUD, losing by 40 most of night to Detroit at the Garden — a game where the Knicks vowed to give Detroit a fight since they needed […]