This was the Kristaps Porzingis Smear game. With Knick fans initally pissed off at the Knicks for trading Porzingis after the trade was announced on Thursday January 31 — in the next two days. which preceded this game, attitude had shifted, as the Knicks franchise stated Porzingis had asked to be traded!

The day before the game, Porzingis posted on Instagram this message: 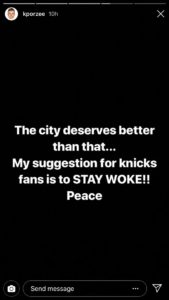 One issue was the Knicks management’s timeline: from what we were reading in the press, the Knicks had been shopping Porzingis for 2 months, then met with him, at which time he demanded to be traded, so they obliged two hours after the meeting since they happened to have a trade in their back pocket.

This didn’t make sense and so on MSG network soon after the 1 pm Super Bowl Sunday game started, MSG employee Rebecca Haarlow interviewed Steve Mills live on tv.  She served up a timeline question for him to get his story straight.

Of course this still doesn’t make sense — the Knicks management had “started to get a feel” Porzingis didn’t want to go forward with them — so they spent several months — not exactly mentioning Porzingis in trades mind you — but exploring “key players on their team and what would it take from our roster” to establish 8 potential trade scenarios. One was left to wonder if they would have done this if their player was Greek Freak or Anthony Davis — or if instead they would’ve done everything in their power to make sure those players felt appreciated.

Then later in the broadcast, MSG posted this: 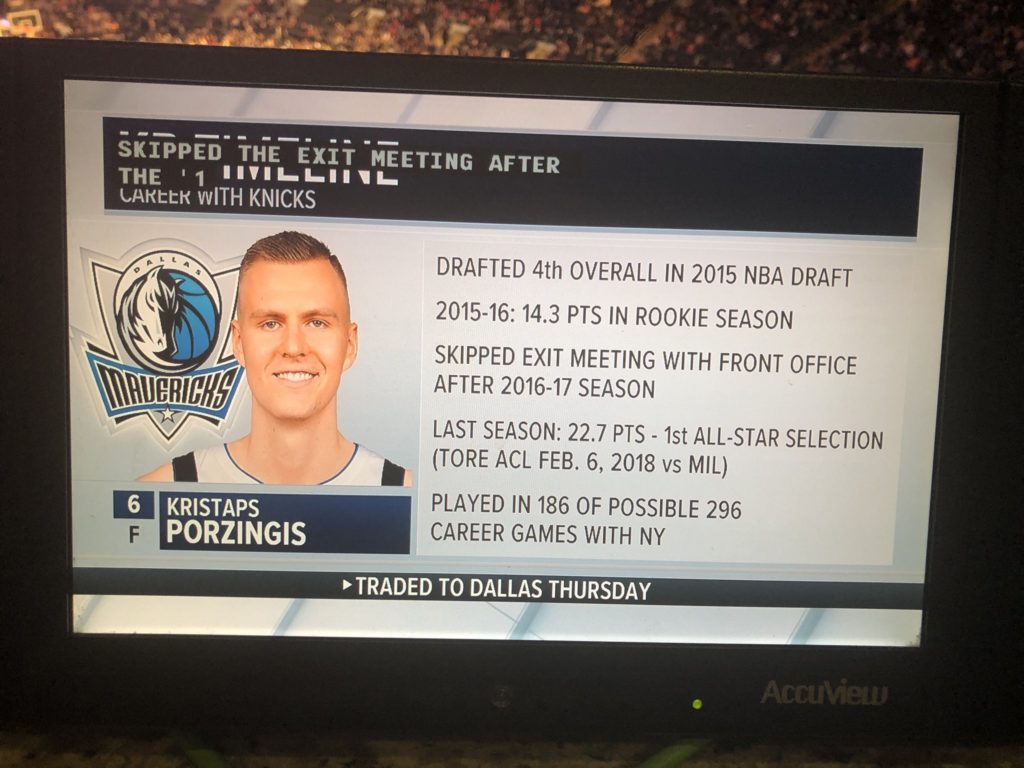 MSG announcers Kenny Albert and Walt Frazier talked to the slide — about how Porzingis had missed the exit interview with the Knicks front office after the 2016-17 season as a reason why the Knicks management must have felt Porzingis might not want to go forward with the franchise. Of course this was during PHIL JACKSON’s tenure — who was then fired for shopping Porzingis. For MSG to even post this graphic seemed pure smear campaign. Walt Frazier then went on about how the Knicks, according to the Mills interview we’d all just seen, weren’t even shopping Porzingis but figuring out who on other teams was available. The Knicks management was painted as innocent.

After the game, MSG employees Alan Hahn and Wally Szczerbiak continued on about how Porzingis’s britches had gotten too big.

You were left to imagine the confidential email that might have went out to them all on Friday or Saturday, with instructions for how the whole thing would be covered — possibly asking for suggestions who knows. Maybe it was a text? Maybe not.

It is important to note that although we love the job Alan Hahn, Wally Szczerbiak, Rebecca Haarlow, and Walt Frazier (less so Mike Breen) do — they are employees of MSG and their boss is James Dolan. So they are not playing the role of journalist here — but rather Public Relations interface. And it is absolutely fine for the Knicks to decide they want to trade Porzingis because he’ll never be ‘that guy’. The issue here is laying the blame on a player for demanding a trade — making him the scapegoat and bad guy, when the Knicks management were the ones orchestrating it. Or not.

Either way not a biggie — Porzingis should be worth a half $Billion in 10 years if he plays his cards right. So he plays the bad guy at MSG. And someday maybe he comes out with his side.

In the game, the new guys all showed up — Dennis Smith Jr, DeAndre Jordan, and Wes Matthews all played. Smith looked great early in the game — but by the end he had posted Frank Ntilikina numbers: 3-9 (o-3 from 3) for 8 points. Except for the assists column — where he had 6 assists. Those assists came off penetrations so he did open up the Knicks offense.

DeAndre Jordan grabbed some impressive rebounds. During the game Marc Berman of the NY Post tweeted, “Jordan’s defensive activity was his big thing in his prime. However, one NBA scout said, ‘He was really just a rebounder and shot-blocker and now he doesn’t block shots.’”

Mitchell Robinson was out sick. Kevin Knox hit some nice high-arcing 3’s as usual and made a beautiful dribble, drive, SLAM move at one point, but didn’t shoot well overall — 5-18 for 17 points.

Get out the way! 💥 pic.twitter.com/7ku3wrYJcT

Wesley Matthews made like his best Tim Hardaway Jr — chucking the ball every time it was passed to him no matter where he was on the court. He was 1-7 from 3 — this after the previous game where he shot 5-9 from 3 for Dallas against the Knicks!

Joakim Noah played for Memphis and was roundly booed. And Knick fans started a “We want Enes Kanter” chant in the 4th. Coach David Fizdale did not put Kanter in — and good for Kanter that he didn’t — if Kanter had come in for 5 minutes it at the end it would’ve killed his scoring & rebounding averages. He is currently 14.0 ppg & 10.5 rebounds per game.

Early in the game, Damyean Dotson continued to look like everything we hoped Tim Hardaway Jr would be — but much more efficient and a better defender. But then he missed some and finished 2-7 for 5 points in only 20 minutes — as Matthews and Dennis Smith Jr ate up the minutes. Mario Hezonja (14 points), Luke Kornet (11 pts, 3-7 from 3), and Noah Vonleh (9 pts, 6 rebounds in only 24 minutes) played well.

For Memphis, Mike Conley (25 pts, Marc Gasol (14 pts), Jrue Holiday (19 pts), and Jaren Jackson Jr (16 pts) weren’t particular impressive but Memphis won rather easily. The Knicks ability to be uncompetitive in this game was impressive. They did make a run in the 4th to get within 8 points with 3.5 minutes left, and MSG was loud and alive — but then Memphis hit some shots and it was over.

Phoenix has top rookie and #1 pick in draft Deandre Ayton and NBA star Devin Booker and a bunch of other good players — including Kelly Oubre Jr. and high draft pick Mikal Bridges — […]

Christmas Day game at Madison Square Garden. Knicks once again taking flak from fans around the league for being showcased on National TV even though they stink. Coach David Fizdale is showing signs of coaching […]

Kudo’s to the Knicks for not wasting anyone’s time on a Sunday afternoon — this one a 3:30pm EST start (just after noontime in LA) — the Knicks were down by almost 40 really early […]