Knicks getting worse and worse; cant even beat Charlotte at home — get smoked by them and are now 8-20. They seem to have more talent than this. Coach Fizdale may be a good coach but doesn’t appear to be a Great coach, with a system.

Frank Ntilikina‘s shot finally falling but his defense is under the microscope these days. Quick guards get by him constantly; his footwork is slow. He doesn’t fight thru screens, even though there’s some fuggazy stat people point to that he led league in PnR defense last year. Might be because Kristaps Porzingis was behind him a good part of year.

Emmanuel Mudiay didn’t have a good game last time out and Trey Burke is out injured, as is Alonzo Trier with a minor day-to-day injury. It will be interesting to see which Knick point guard gets the majority of playing time vs Colin Sexton of Cleveland. The Knicks have had such a revolving point guard situation to this point that “It’s a Hard Knicks Life” podcast created a terrific graphic for it. 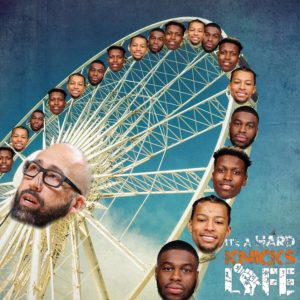 Enjoy watching Kevin Knox, Mitchell Robinson, and Alonzo Trier who may still be out with that minor injury. And big man Kanter. Rooting for Ntilikina but we’ll see.

Cleveland enters this game 6-21, with 2nd worst record in NBA (ahead of just Chicago). Knicks are 5th worst.

3. The Bernard King Rebuild Orchestrated by: Dave DeBusschere became Knicks GM, and there was an in-flight rebuild. Highlights: Hubie Brown was brought in as coach, stressing Defense. Micheal Ray Richardson was traded for Bernard […]

The 13 Knicks Rebuilds Since their Last Title in 1973

Since the NY Knicks last won a title in 1973 it seems like they’ve had 35 rebuilds over the last 45 years. It’s actually been over a dozen — of all kinds: Rebuilds based on […]