This was one the Knicks were supposed to win. At home vs 16-24 Phoenix. A revenge game as Phoenix had beaten them in Phoenix two weeks ago — the first game of that winless 4-game roadtrip.

This time not only did they not win, but Phoenix blew them off the court at MSG. Even with the new coach Mike Miller. Even with everyone back from injury.

Maybe the Knicks just stink after all. Maybe there will be no .500 2nd half.

The Knicks had a 7 point lead after 1 quarter. Then Phoenix dominated in the 2nd quarter, added more to the lead in the 3rd, and put the Knicks away in the 4th. The Knicks couldn’t hit outside shots, and they weren’t quick enough defensively.

Meanwhile Rick Rubio danced around the Knicks. Frank Ntilikina — did not shut him down. Rubio was 10-18 for 25 points, 8 rebounds, 13 assists. He is being credited by many as the main reason for Phoenix playing better ball lately — they are 6-5 in their last 11.

Deandre is having fun tonight! pic.twitter.com/s56E1HSlNZ

DeAndre Ayton dominated inside: 11-15 for 26 pts, 21 rebounds, with feeds from Rubio and others. Devin Booker had 29 points on 9-17. That’s the Phoenix team — a 3-man show with supporting players like Dario Saric and Mikal Bridges up front.

RJ Barrett sprained his ankle badly in the 2nd quarter and left the game with only 14 minutes played. He might have helped in the 2nd half. And Reggie Bullock is now out and they could have used his shooting.

Mitchell Robinson got his dunks, steals, and blocks (30 min, 5-7, 12 pts, 8 rebounds, 3 steals, 2 blocks) but could not contend defensively with Ayton — and this has been a recurring event this year — Robinson is too skinny — or is trying too hard not to foul — to defend another team’s monster big in the paint; why the Knicks have had interest in Andre Drummond — if their goal is to play .500 ball in the second half and be a ‘team on the rise’.

Block on one end, dunk on the other 😤 pic.twitter.com/iASrXnWJdt

After the game coach Mike Miller said the Knicks didn’t set a defensive tone for the game. “We didn’t have a good base underneath us to carry us through with making the kind of plays that you need to make to win games in the NBA.”

Mitch out here looking like a free safety pic.twitter.com/P9Qh2sqQrk

Damyean Dotson (26 min, 6 pts) continues to log more minutes than Ntilikina. The two are very close in lifetime minute per game average — Ntilikina is at 21.7; Dotson at 20.1 — the two were both picked in the 2017 draft. Ntilikina has played 3449 minutes in the NBA so far; Dotson has played 3073 — before this game. 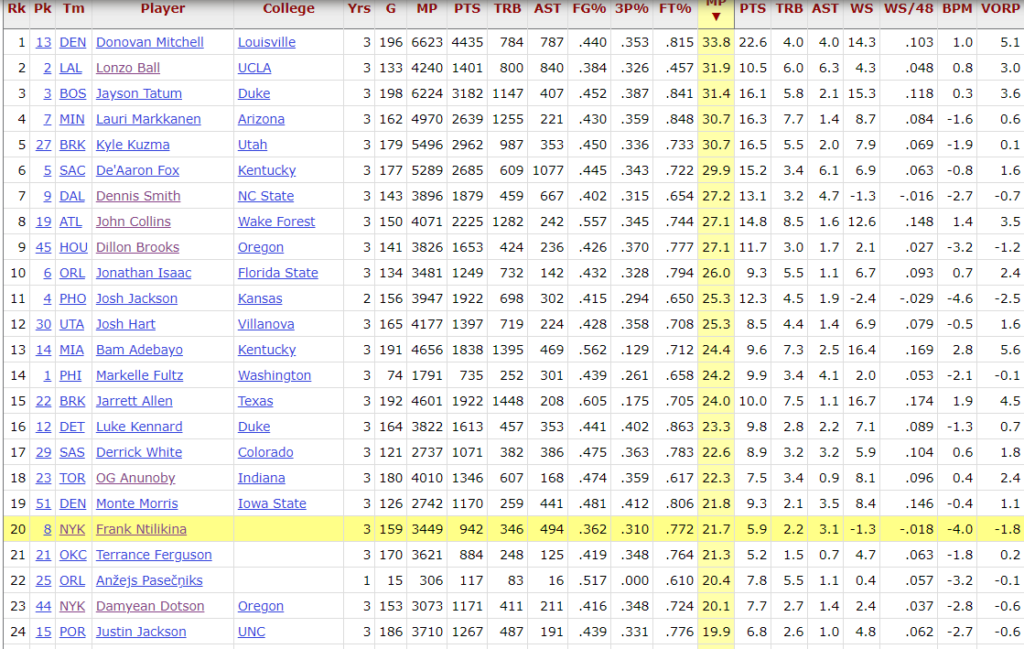