It was another night, another win for the Knicks. “The Plan” is working. The young core, with the young “Money Ball” free agents, with the right coach — are developing a winning culture predicated on defense and proper spacing and execution on offense.

The young core is led by Mitchell Robinson and RJ Barrett. And they led in this game — Robinson with terrific interior defense — the Knicks outmuscled Washington with their inside game on offense and defense. And RJ Barrett (14 pts, 5 rebounds) had a good game — coming up big in the 4th with a huge 3 and a key defensive play. Frank Ntilikina played well at the start of the 4th (stepping up his game from a so-so end of 3rd quarter). Kevin Knox played well on defense (fighting through screens) and ok on offense (6 pts on 1-4 shooting) in 19 minutes — he finished with a team-leading +18.

And the young “Money Ball” free agents delivered the goods — Julius Randle was the hero with his 3rd consecutive game of 30 or more points. Bobby Portis and Taj Gibson played great — the Knick Bigs overwhelmed Washington inside. And Elfrid Payton led the team at the point, especially down the stretch in the 4th when the Knicks stepped up their game and closed it out.

Julius gets to his spot, nails the jumper ✅ pic.twitter.com/TobgytNZNX 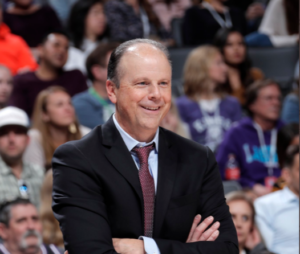 But it was all due to the ‘right coach’ — Mike Miller — guiding the Knicks with the continuously changing offensive strategies against mostly a zone but a constantly changing Washington Defense, providing the right spacing to players like Randle in which to operate, and getting the Knicks to play a frenetic defense again.

The Knicks withstood the charge of Gary Payton Jr, (6-9 for 15 pts, 6 rebounds, 6 steals) who was electric again — as he was when he led the Wizards to a win over the Knicks at MSG last week. Isaiah Thomas suited up for Washington; Bradley Beal was injured and did not. That helped. Thomas misfired constantly down the stretch (5-21 for 20 points).

The Play by Play

The Knicks led by 12 points several times in the first half and late in the 3rd quarter. But Washington started a run late in the 3rd, led by Ish Smith (who scored two consecutive driving layups against Ntilikina), and some Jordan McRae 3’s to pull to within a point with 10 minutes left in the 4th. Ntilikina settled down on D at the start of the 4th, getting more aggressive on offense and hit a big 3 with 10 minutes left to keep Washington at bay, 89-85. But another McRae 3 and some free throws gave Washington the lead.

Ntilikina hit free throws to tie the game and left for Elfrid Payton at the 8:30 mark — and that’s when Julius Randle took over; playing like Zach Randolph down the stretch he would not be denied on some of his inside moves; even passing to himself off the backboard once. The Knicks defense — especially the interior defense — stepped it up on the Wizards, forcing many misses — by Isaiah Thomas, Troy Brown Jr, and others, and the Knicks continued to attack the interior on offense. The Knicks used their Bigs to win this game.

One of the fun things to watch with the Knicks these days is the post-game interview with coach Mike Miller. It is a gulping of tactics; none of the “my guys played well but we lost somehow because they’re the better team” jazzy rhetoric of the previous coach David Fizdale. After this game, Miller discussed in detail how — although Washington (coached well by Scott Brooks) was playing mostly a zone — their defense was actually constantly changing, and the Knicks had to constantly adjust their offensive strategy.

The Knicks next play Portland at MSG on January 1st, and then go on a tough West coast 4-game swing. They play 16 games in January and it would be optimistic to say they can go 8-8. If they do… “The Plan” will have passed another milestone.

There were many Knick fans in attendance in DC, including this woman from Japan attending her first Knicks game: