That was hopefully going to be the headline of this game — a Walt Frazier word — after RJ Barrett drove the lane and put up a shot with Knicks down 3 and 10 seconds left, but missed, the ball bounding out to Kevin Knox, who flipped it out to Marcus Morris who hit the 3 to tie the game! Boston still had 4 seconds on the clock cautioned Mike Breen.

And so Boston inbounded after a timeout to Jayson Tatum in the right corner, who faked left on defender RJ Barrett, then pulled up right for a DEEP corner Jumper with Barrett’s outstretched arms near his face — bang for the lead with 1.5 seconds left. The Knicks hail Mary’d a pass into the front court that was intercepted and that was ballgame.

Another loss but the Knicks played well on defense and passed the ball better on offense — they are ‘this’ close. But they’d better start winning soon because things can derail — as the Knicks saw in 2016-17, when they were 16-13 after almost 30 games, then lost close game after close game in January and the wheels came off, and in 2017-18, when they were 16-14 after 30 games, and the same exact thing happened.

Coach David Fizdale clearly realizes the magnifying glass is on him, and the Knicks need to WIN. So he played an 8-man rotation in this game — something coaches typically reserve for the playoffs. Fizdale seems intent on getting this team Winning soon.

ICYMI: Frank met him at the rim 🖐 pic.twitter.com/NCF0yhIO17

Ntilikina played some D on Kemba Walker, who was the other main reason why Boston won this game (33 pts on 8-19 and 14-14 from the free throw line) — but the Knicks did a lot of switching on Defense in this game — so in the 4th a number of guys guarded Walker at any one time including Wayne Ellington and RJ Barrett.

Spero Dedes on the radio, noted the Knicks switching D against Boston at the half, and suggested one of the Knicks’ assistant coaches had implemented it.

This could be huge for the Knicks. A head coach is sometimes only as good as his assistant coaches (see Doc Rivers winning 2009 title in Boston after 23 wins the year before; putting 3 superstars together for first time, but having the magic sauce of assistant coach Tom Thibodeau implementing a defensive system.)

The 8-man rotation includes of course RJ Barrett, the point guard down the stretch, who had 15 pts (5-17), 7 rebounds and 5 assists. Barrett had a couple of drives to the rim roll in and out in the 4th which hurt. Not this one in the first half though:

RJ hit him with the euro ☝️ pic.twitter.com/ekfZettrP7

And the 8-man rotation includes Bobby Portis and Mitchell Robinson at center — Robinson only played 16 minutes in this game due to foul trouble — he picked up 3 in the first half and then because of a sprained left ring finger — when he went up for a jam and was blocked by Daniel Theis in the 3rd, his hand was smashed against the hoop. He went out for xrays which were negative and returned to the game in the 4th quarter.

Robinson was there in the 4th for a terrific block on Kemba Walker which led to a drive the other way — Barrett with a nifty pass to Ntilikina for a layup.

And Wayne Ellington is one of those elite 8 — he had 9 points on 3-10 — and is getting the nod to play over Allonzo Trier who is cemented to the bench. Ellington does not have the handle or the penetration or the defense that Trier has, but seems to move the ball better on offense. But as Tommy Beer pointed out, “Ellington is 4-for-18 from the floor in the knicks last two games. Those minutes will go to Trier if Ellington’s shot isn’t falling.”

And then there is Julius Randle — also part of the elite 8 but Knick Twitter would say that should be reexamined. In this game Randle clearly was trying to ballhog it less — and only took 7 shots (3-7 for 8 pts). He had 10 rebounds, 5 assists, but 6 turnovers.

Another reason why the Knicks lost is the free throws. The Knicks shot 14-21 as a team, which doesn’t sound great but individually nobody on the Knicks did that bad — Morris was 8-11, Barrett was 4-6, Randle was 2-3, and Robinson 0-1. The difference was that Boston was an ungodly 27-29 from the line — a big part of that was Kemba Walker going 14-14.

Before the game, reporter Mike Vorkunov of The Athletic tweeted, “Just had a Knicks beat writer flip me off in the press room. Feel like the grind of the season is starting to wear people down but it’s only 6 games in.” This left Knick Twitter to wonder who it was. Some said Marc Berman but I don’t think it was him — as he is a pro’s pro on twitter and never bashes back at other reporters who bash him; although he was feisty yesterday in interviewing Knicks at their practice facility wearing a Brooklyn Nets jersey! Some said Stefan Bondy. But like the Carly Simon song — when you put something like that out in public, it almost demands Vorkunov now say who it was because otherwise everyone is under suspicion.

Daniel Theis looked terrific in the first half of this game — blocking shots as if he were 5 inches taller than his listed 6’8 height.

Carsen Edwards — #33 pick in the June 2019 draft and a 2-time All American at Purdue — looked like the answer to a future Celtics trivia question in the 1st half as he jacked the ball up from all over and played out-of-control basketball for the second time in a week against the Knicks. You hoped they would keep the undersized (listed at 6’0) guard in all game for a sure Knicks win but they pulled him out — he finished with 2 pts (1-6, 0-4 from 3). Seems like a nice guy and hope he improves — he’s supposed to be a deadly 3-pt shooter.

It was a controversial night for Brooklyn Coach Kenny Atkinson as he held up a sign of a ghost-buster’d out Dennis Scott to remind his players to guard James Harden from getting loose for 3’s in a game in Brooklyn. It is a technique used in college football. 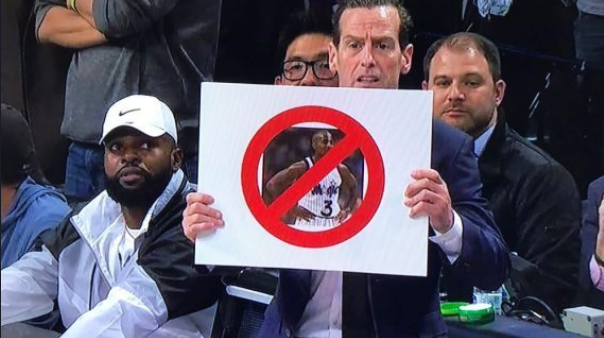 Later Kenny was caught eating his ear wax on tv, which made the twitter rounds.