It looks like it may have been another good draft for the Scott Perry Knicks. They went for and got SHOOTERS.

Last year they took Kevin Knox at #9, picked Mitchell Robinson in the 2nd round, and signed the undrafted Allonzo Trier after the draft. Knox and Trier finished in the top 8 in rookie scoring; Robinson led the NBA in blocked shots per minute and has sky-is-limit potential.

Early last season Coach David Fizdale said the team had a lot of young talent but lacked the shooters that he would prefer to have. In this draft, the Knicks got SHOOTERS. The 2019 Summary:

The Knicks then signed the following undrafted players:

Kris Wilkes was expected to get drafted. As a Knick fan you hope a) he’s really good, and b) going undrafted gives him the chip on his shoulder that it gave Allonzo Trier.

The Stats Back Them Up

The Knicks getting SHOOTERS is backed up by these stats from Synergy Sports: 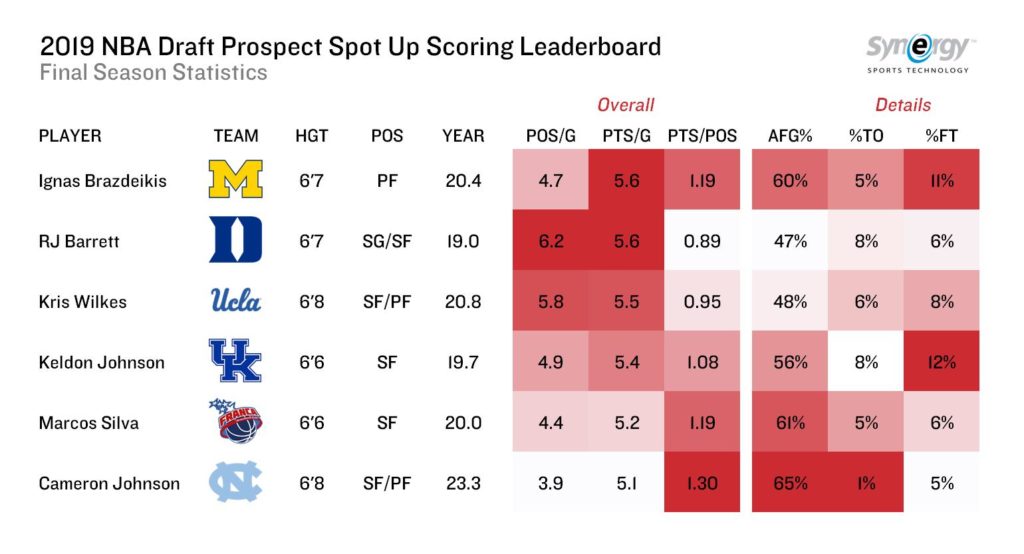 Zion Williamson was asked what it was like being the best prospect since LeBron James, and his answer was — “it feels like being RJ Barrett”.

RJ Barrett: What does it feel like being the best prospect since LeBron James?

(Note: Jimi Hendrix and Eric Clapton were once both individually asked what it was like to be the best guitar player in the world, and both said “I don’t know you should ask Roy Clark”. Not sure if Zion knows that.)

RJ Barrett scored 35 points and took over at the end — hitting big shots in the clutch — to carry the Knicks to a 123-117 victory over the Pelicans in New Orleans. It was […]

RJ Barrett scored 32 points — his second straight 30-point-plus game — and the Knicks defense clamped down to lead the Knicks to a 108-85 win over Dallas at Madison Square Garden. Dallas was without […]