The last game before the very long All Star break — a 10-day break. The Knicks, who had ‘just missed’ winning their 5th straight game against Atlanta, saw this as a ‘winnable’ game against 19-33 Washington on a Wednesday night at Madison Square Garden. And it was a close game throughout — one that it looked like the Knicks would win. The Knicks were down by 3 late in the 3rd, still down by 3 with 9 minutes left in the 4th, and down by 5 with 6:47 left.

But Washington’s record belied the fact that they’ve been playing good ball themselves lately — winners of 4 of their last 6 coming in, and now 7-5 in their last 12 and only 3 games back of a playoff spot. They are well coached under Scott Brooks.

The Wizards pulled away in the last 6 minutes to win this game in a blowout. Bradley Beal was tough to guard (11-23 for 30 pts) and Davis Bertans (16 pts) killed the Knicks down the stretch. Washington made the plays and the Knicks just didn’t. NY made stupid mistakes and didn’t shoot well. That cost them their energy on both ends of the court. Like the Atlanta game, this was another game where they really missed Marcus Morris‘ shooting and overall leadership and play in the closing minutes.

It could be argued that with Morris, the Knicks win the Atlanta game (who keyed their defense on Julius Randle down the stretch and in both overtimes), and possibly the last 6 minutes of the Washington game are different — and NY could be riding a 6-game winning streak into the All Star game and talking playoffs. You hope that late 1st round pick is worth it.

The loss left a bad taste — that will last through this very long 10-day break. A tough time for it too with so many rumors circulating about the new VP coming in eventually, and the job security of coach Mike Miller and GM Scott Perry.

But his backups were ineffective at best. Dennis Smith Jr was horrible again — 4 turnovers in 6 minutes in the 1st half. So coach Miller went to Frank Ntilikina to lead the second team at the end of the 3rd quarter. When Ntilikina came in for Payton, all penetration and easy buckets for the big men stopped — Ntilikina continued in this game to come up court, hand it to someone, and step to the side — then get the ball back, dribble but not penetrate — pass, or take a midrange jumper and miss. He only played 10 minutes, and he sported a fine -3 plus/minus — but there were opportunities for the Knicks to take charge late in the 3rd or early in the 4th, that just didn’t happen. The Knicks became a (contested) jump-shooting team when Ntilikina was on the court.

Mentioning this on Twitter got a lot of agreements, but also woke up some of Ntilikina Hive who strongly disagreed, asking why Ntilikina should be blamed for the loss when he only played 10 minutes. And Ntilikina was removed with 6 minutes left and it was Payton who was leading the point during those last 6 minutes when Washington took charge.

Bobby Portis was a culprit to boneheaded plays in the 4th quarter. He got into it with Moritz Wagner, Washington’s 6’11 bruiser small forward, and got a double technical then got tossed with a 2nd T early in the 4th. He was 2-6 for 7 points and the comments he made after the last game, where he said the team would not miss Marcus Morris — because now they’d have a chance to pass the ball around more — seemed egotistical.

After that game, as quoted by Marc Berman of the NY Post, when asked if the Knicks would miss Morris, he said, “Not really. I averaged 13 (points) and 14 (points) the last two years. We have scorers who can score the ball but we want to share the basketball and be [a] team. Last four games we didn’t care who was the leading scorer. We wanted to just win the game. I feel our team is peaking in the right direction.”

On a good note, besides Payton’s play, Mitchell Robinson again dominated inside for much of the game — 11 pts on 5-6 shooting with 8 rebounds and a block in 18 minutes. After this game, the all-time highest field goal percentages in a season are as follows:

And Julius Randle did his thing — 21 pts on 9-18 shooting with 13 rebounds. Taj Gibson played well in his 10 minutes. Kevin Knox played excellent defense again in his 10 minutes on the court. This is becoming a thing. He only took one shot and made it; a nice rainbow jumper.

But the Knicks miss Marcus Morris.

Watching the Game in DC Area, Where Nobody Cared

I was on a work trip in DC, so watched this game from The Backyard Grill in Chantilly, Virginia, near Dulles Airport. The Backyard Grill has an enclosed outside area that allows you to smoke a cigar and have a beer while you watch the game. The large bar with inside and enclosed “outside” area has about 15 big screen tvs — only one of them had the Washington-NY Knicks game on — the others had college basketball and a few had the national NBA game. 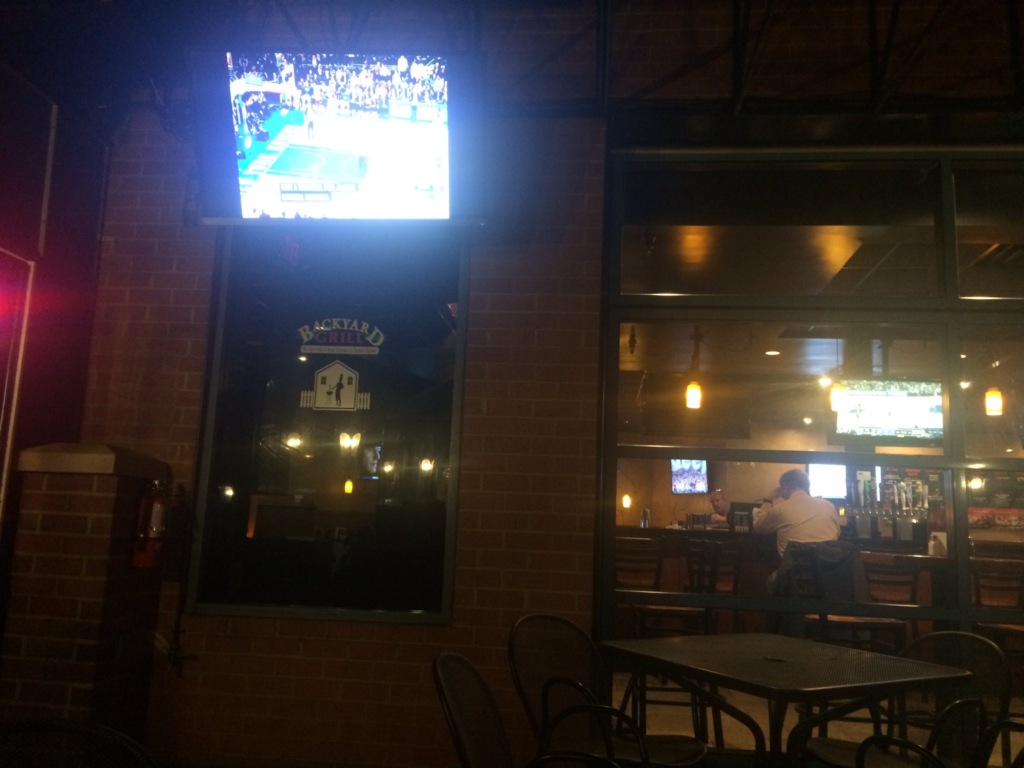 The spacious, enclosed ‘outdoor’ area can be filled with people or have relatively few, depending on the night and time; on this night it was almost empty — there were only 2 other customers sitting at a table. (The ‘indoor’ area was filled with people.) I sat down to a table by myself in the corner in front of the one tv that had the Knicks-Wizards game on, and smoked a Padron 1926 while drinking a local draft beer. I anticipated victory.

But the Padron was so smooth it lacked taste or bite — not as good as the Padron 1964 Anniversary cigar. The beer was good but I didn’t want a second, which I bought anyway when the bartender came over and started talking up the game — saying he used to watch the Wizards a lot when they were the Bullets back in the late 70’s during their Championship run years — with Elvin Hayes and company. He said besides Bradley Beal he had no idea who the other members of the current Wizards were. And no one else in the bar gave a damn about this Wizards game either. Just me — I was the only one in the whole bar who gave a damn about this game. It left a bad taste.