If you are a Knicks optimist, predicting a Knicks season has led to failure in almost all of the last 18 years. There was that one year where they had Jason Kidd and Rasheed Wallace with Carmelo Anthony and got off to that great start, and ended with 54 wins under Mike Woodson. Besides that they almost always fail to live up to any optimistic predictions.

As the preseason ended, we tweeted this about what the game-finishing lineup should be:

I came so close to adding Bobby Portis to the above, next to Mitchell Robinson, and would have put in parenthesis — (depending on foul trouble and if the Knicks are behind and need offense) — but that was too long for twitter and I felt it would be distracting to the overall synopsis.

Days later (yesterday) rumors circulated that that is exactly what the Knicks starting team will be on opening night in San Antonio — sans Robinson who injured his ankle in practice this Monday, who will be replaced by Portis.

Trier and Barrett Together

The key point in the above finishing five is Allonzo Trier and RJ Barrett together in the backcourt, with none of the 3 ‘point guards’ who have been fighting for that job. I’m very high on Allonzo Trier — and even though he didn’t play many minutes in the preseason, I think it is because coach David Fizdale knows what he has in Trier. In the final quarter of the final preseason game, Trier and Barrett played together and Trier lit up the floor with his offense.

Last year after a terrific first 3 months, Trier clearly took a back step in January and February as he was clearly trying to “pass first” and incorporate passing into his game. He came through that learning process and became a more complete player as the season ended, flourishing on offense again. His defense all year was pretty good. He stays in front of his man, plays an ardent defense, and can block a shot as a trailer on an opponent’s full-court drive. Aka he has hops on D.

My goodness, Allonzo Trier is such a bucket pic.twitter.com/gVoB3dzZz2

RJ Barrett looked Real Good the last two games of summer league and the entire preseason. He plays like he is the captain on the court — as if it is his game, and he is looking for teammates to setup at the right place and time, or will take it himself. His passing is excellent, his court vision is excellent, his leadership is excellent.

And with Allonzo Trier a walking bucket, who can hit the 3 (close to 40% last year) and penetrate at will to open up the defense — those two are what you need down the stretch of any game.

Julius Randle has looked terrific in the preseason — his ability to pass — out of the post or from anywhere on the court — has been eye opening. He can hit the 3. He is athletic and can postup and score in a variety of ways. Marcus Morris is a post up and seems to have a game similar to Carmelo Anthony — hopefully without the hickup to the offense. If he can play well in tandem with Randle, Trier, and RJ Barrett — the Knicks could have a dynamite team. Kevin Knox looked good in preseason — he is driving to the basket with more directness now, is getting after it more on Defense, seems to be in the right place on the court more, and has that pretty, effective, high-arching 3. He’ll probably get 25 minutes off the bench most nights. 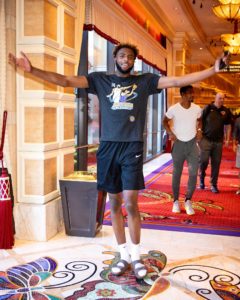 And then there is Mitchell Robinson who had a poor preseason but whom has a future of superstardom ahead of him as he raises his game and shows the turnaround jumper. He is your Defender on the finishing team. Bobby Portis‘s weakness is his defense — so again he finishes if you need points or if Mitch is in foul trouble.

Taj Gibson looked good in preseason. He is there for veteran leadership. He’s a New Yorker.

Elfrid Payton looked like the best point guard in preseason, based on the last preseason game. He penetrates on offense, opening up the D, and plays a very tenacious defense. Frank Ntilikina had a good preseason and great summer with the French FIBA team — but still has an aversion to penetrating to the basket. His defense can suffocate some quick guards (like Trae Young) but some quick guards give him trouble due to his lack of foot quickness. He is a player in the seams. Dennis Smith Jr looked horrible in the preseason; mistake prone; out of position often; sometimes his penetrations are wild but reckless and don’t amount to a basket.

Wayne Ellington looked ok in preseason. And we hardly saw Ignas Brazdeikis at all. The Knicks other 3-pt shooters are Trier, Randle, Knox, and Portis. That’s plenty of fire power. 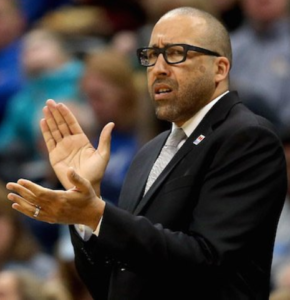 The magnifying glass is on David Fizdale this year. He seems to be a coach without a system on offense or defense; a feel-good developmental coach always looking to make the players better. But the players will rebel if they are not playing and the Knicks are losing. Great coaches of Knicks past seemed to care less about the players — if they were good enough they played in their system; if they weren’t they were gone.

Mike Miller is on the bench this year, promoted from Westchester where he led those Knicks to the playoffs the last two years. So he provides hope if Fizdale fizzles. And maybe Miller can help make this team win this year. But the trick there is that if Miller provides some sort of ‘secret sauce’ to success, the Knicks management had better understand that and make sure another team doesn’t come in and swipe Miller away. Keith Smart is also a Knick assistant with a terrific reputation. The Knicks have lost a number of good assistant coaches in the past (amongst them, Tom Thibodeau and now Kenny Atkinson in Brooklyn).

Last year they supposedly lost on purpose the entire second half so they weren’t ‘really’ a 17-win team. So after the ‘money ball’ free agency that gave them a deep team of good players, to expect them to add 10 more wins on last year’s total — to say 27 or 28 wins — is not a success. It is a failure. If that happens, Fizdale should be gone.

I predict the Knicks will win 38 games this year. I’m putting faith in Fizdale and Miller and Smart and this pretty talented team, and on the abilities of Trier and Barrett in the backcourt, and Elfrid Payton and Dennis Smith Jr, with Randle and Morris and Robinson and Portis. It will be a growth year and a year to prove this team is heading in the right direction to free agents like Anthony Davis (summer 2020) and “Greek Freak” Giannis Antetokounmpo (summer 2021).