The Knicks frenetic, encompassing Defense is getting better and better, and starting to put them in position to win on a nightly basis. Plus they now seem to have the confidence and know-how as a team to close out games. And they have clutch sharpshooters like Alec Burks and of course Julius Randle.

The Knicks won their 4th in a row, and are now 29-27 with 16 games left in the season. Miami lost so the Knicks are in 6th place in the East.

Five reasons how this was another great win:

The Knicks put up a Wall of defense against Zion Williamson all night. And they rotated quickly when he passed the ball. The Knicks amped up their defense at the end of the 3rd quarter and then throughout the 4th quarter. Zion was throttled and Brandon Ingram often seemed shaky in taking his shot against the torrid defense.

This became the picture of the night posted on twitter: 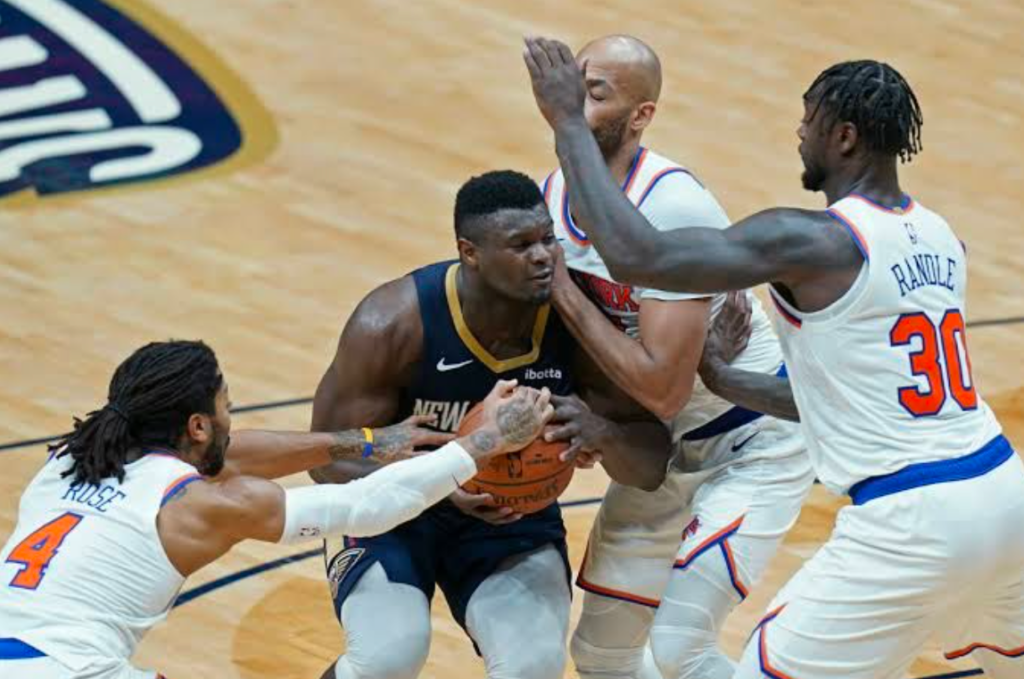 Look at the defense from the Knicks. Giving Zion no room, Rose and Gibson forming a wall in transition. Double drag, even with screens low Randle goes under and Rose ends up showing. Active trap when Ingram comes off, great help, great rotations out of it. pic.twitter.com/Nt7KNVPoqQ

The Knicks interior Defense was all the more impressive since Nerlens Noel was out with injury, and of course Mitchell Robinson is out. That meant Taj Gibson started and Norvel Pelle backing up. Gibson did a job all night (8 pts on 4-5, 10 rebounds) and Pelle was on the court at the end of the 3rd/beginning of the 4th quarter — he finished with a +19 in 13 minutes!

On the Knicks offense, Alec Burks came up Big again and again in the 4th. Coach Tom Thibodeau has Burks playing the point late in the game because he can handle the ball, pass, and is an assassin shooter.

Burks again and again and again hit big shots; 3’s from straight away and dribble penetration mid range jumpers. Burks finished with 21 points on 7-12 shooting (4-7 from 3; 3-3 in free throws) and a +24. He was a big part of the offense during the 4th quarter run.

AB in the 4th = A PROBLEM pic.twitter.com/4gUQZ3xaXG

And Julius Randle was his usual All Star self; hitting big three’s, scoring from all over; playing great D inside, rebounding, and “spraying the ball” with his passing as the offense ran thru him. He finally had his 3 falling after a multi-game slump. Randle out dueled and out-did Zion — 32 points on 11-26 shooting (5-8 from 3; 5-5 in free throws), 8 rebounds, 5 assist for a +6.

Elfrid Payton played stellar ball again, penetrating and scoring when the Knicks needed him most — in the 2nd and 3rd quarters to keep the Knicks in the game when it looked like New Orleans was going to pull away.

They completely outplayed the Pelican point guards Eric Bledsoe (6 pts in 27 minutes) and Kira Lewis Jr (2 points on 1-6 and a -16).

Special mention has to be made for Reggie Bullock — whose shooting has gotten better and better as the season has progressed, and is an outright assassin now with Burks. Bullock had 16 points on 6-10 shooting (4-7 from 3) and of course plays the heady, tough man-to-man Defense.

Naji Marshall, a 6’7 forward, gave RJ Barrett fits all evening, hounding him on defense. Barrett was limited to 2-10 shooting for 6 points. Marshall gave the Knicks fits on the offensive side as well with 14 points on 5-9 shooting (3-5 from 3). In a typo on a tweet I called him Nazi Marshall — ironic because that’s what he was all evening to the Knicks.

The Zander Hollander Complete Handbook of the 1988-89 Knicks

Before the internet, in the 1970’s, 1980’s, and 1990’s — as a basketball fan I couldn’t wait each October for the Zander Hollander Complete Handbook of NBA Basketball to be published and be available in […]

The 13 Knicks Rebuilds Since their Last Title: Rebuild #6

The Knicks started off their tough 6-game, near-end-of-season, West Coast trip by taking care of business in Houston, drubbing the horrid Rockets from start to finish. Julius Randle led the Knicks with another MVP-esq performance […]