It came down to a final shot — and a controversial ref call — a 3-pt jump shot by Julius Randle aiming to tie the game with 5 seconds left that Kyrie Irving got a hand on — Randle came down with the ball and refs called it a travel; Julius and many observers felt it was a blocked shot and still Knicks ball.

Ky blocked Julius Randle shot attempt. Why did Scott foster blow his whistle and give the nets the ball?

The fact that it came down to a final shot was an amazing development in itself. It showed the Knicks Grit and Defense enables them to play with anybody.

The Knicks were down by 18 points midway thru the 3rd quarter. But they didn’t seem on the verge of being blownout — they were Rocky getting hit but hanging in there; as a fan you felt they had a chance to hang in but it was starting to look like they had no chance of winning — probably a 10-pt loss.

But then the Knicks Defense started to get tighter and tighter, and RJ Barrett and Julius Randle started to up their game.

A flurry by Julius Randle at the end of the 3rd quarter got the Knicks back within 12 — the same deficit they were at at the half. It was big. In fact, Randle had played great defense on James Harden in the closing seconds of the half to cause Harden to air-ball a 3, keeping the Knicks within 12 at the half, which was also Big.

The Nets had run up a double-digit lead in the 2nd quarter when the Nets kept running a James Harden to Jeff Green pick-and-roll that the Knicks kept falling asleep on — seemed they ran it like 7 times successfully. Green finished with 20 pts on 8-11.

In the 4th quarter — the Knicks DEFENSE stepped up big — with non other than Frank Ntilikina in the game and a big part of it. Coming off a game where he was chastised to the bench — but with the Knicks missing Elfrid Payton and Derrick Rose — coach Tom Thibodeau went to Ntilikina, who has done a good job in the past defending Brooklyn’s Kyrie Irving.

Ntilikina played with defensive energy and fervor, and RJ Barrett started playing bullyball — driving to the basket for buckets. His driving layup with 4:29 left pulled the Knicks to within 4 at 107-103.

If only Ntilikina could have hit a jumper or two. Or even just one — one jumper. He went 0-5 and fouled out with 3:48 left in the 4th. Overall 16 minutes, 0 points — but a +5 — he could sleep well; he had done his part to get the Knicks back in this game. Some of the

The Knicks played a fantastic pressure on-ball defense in the last minute — instead of fouling. Down 3 with 7.7 seconds left the Knicks pressure 0n-ball defense forced a Nets turnover. A foul was called on RJ Barrett for reaching in but replay showed he clearly had hand on all ball — and the Knicks successfully challenged the call, which gave them the ball and Julius Randle the chance to tie with the 3. Because of that won challenge, the Knicks couldn’t challenge the ensuing controversial call that Randle traveled when others felt it should have been called an Irving block and Knicks ball.

And so that was ballgame.

Randle had to be restrained by his teammates from seeking a conversation with the refs; he was LIVID at the call.

Immanuel Quickley started at point and led the Knicks and pushed an up-tempo Knicks offense all evening. He was intrepid with no fear against Kyrie Irving, James Harden and the Nets. He attacked, attacked, attacked, and spread the ball around, getting rave compliment from the ESPN female announcer — the game was a nationally televised game. 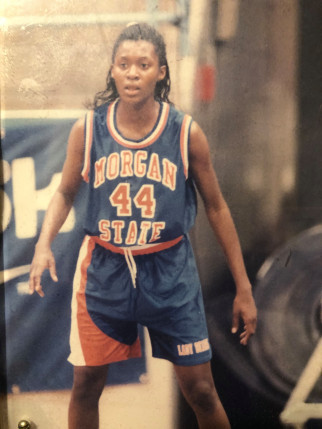 At one point ESPN put a picture of Quickley’s mother Nitrease Quickley on the screen, revealing that she was a star at Morgan State and these days is their Free Throw coach. They said that when Immanuel misses a free throw, she needs a few minutes to herself to digest it.

At one point in the 3rd — with the Nets up big and the ESPN cameras showing new Net Blake Griffin on the sidelines suited up but not playing yet — it seemed that the Knicks have Batman and Robin in Randle and Barrett — but the Nets have Superman, the Incredible Hulk, the Flash, and Spiderman — in Kevin Durant, James Harden, Kyrie Irvin, and now Griffin.

But the big time bully ball that RJ Barrett and Julius Randle brought to the 4th highlighted the Knicks evening. At the end, the crowd at Barclay’s Center in Brooklyn were chanting MVP MVP for Randle! Batman and Robin can take on anyone.

Barrett was 10-10 from the Free Throw line — amazing news and great development as he is getting better and better at the two areas that were his only weaknesses — free throw shooting and 3-pt shooting. He had 23 points and is now shooting .747 from the free-throw line this year. He was 1-3 from 3 and is .358 from 3 on the year.

Randle started off slow but finished Extremely strong — and had 33 pts, 12 rebounds, 6 assists. He was 14-27 from the floor including 3-6 from 3; extremely efficient as usual.

Reggie Bullock kept the Knicks within range in the first half with his best night of the year. At one point I tweeted that Reggie Bullock is the player that everyone expected Frank Ntilikina to be. Bullock plays Tough on-ball defense, has an NBA big guard body at 6’6 and strong and athletic — he was guarding Harden for a good part of the game; is a head’s up defender in general; and was hitting his 3 on offense. He finished with 19 points on 7-12 shooting (5-10 from 3) for a +1.

At one point in the 4th quarter, ESPN had its microphones in the Nets huddle, and you could hear Steve Nash instructing his players to play good basketball. It did not come across as Strategic. A far cry from a Thibodeau huddle.

Alec Burks played well, as did Taj Gibson and Nerlens Noel — all three a big part of the Knicks defensive grit.

Cameron Johnson and Mikal Bridges came out of nowhere to kill NY in the 4th, and a gallant Knicks comeback was thwarted by Chris Paul hitting circus shots to end the Knicks 9-game winning streak, […]

In their second matchup of the young season against playoff-bound Indiana, the Knicks played a good brand of basketball throughout, and took the game in the final minutes. The ways how: 1. Knicks Executed Down […]

Reggie Bullock got the last laugh. He lost his starter’s role to start the game, and answered by exploding for 20 points off the bench, but in the waning minute of this game, he missed […]