Once again, for the iftieth time in the last 5 years — the Knicks were not able to close out a close game. Like Deja Vu all over again. Just like the game before against Miami. And all those games of seasons past. Not even this 2020-21 version of the Knicks, with Tom Thibodeau as the coach, and growing (and better) talent on the team, and even Derrick Rose back.

This game was knick-and-tuck all night, but New York entered the 4th quarter with a 6-point lead based especially on the play of the 2nd unit led by Rose. Miami Coach Eric Spoelstra was shown looking on worriedly from the sidelines with his assistant coach. But Miami pulled back into it, and it came down to the wire.

The final play harkened back to the missed finger roll of Patrick Ewing in that late 90’s playoff 7th game that would have sent Knicks to the next round. The Knicks were down 2 with 6.2 seconds left in the game. A play was called to open up the left lane for an RJ Barrett drive. NY ran the play and Barrett broke free to the basket, laying the ball up with his favored left hand — but the ball rolled in and out. Ballgame.

The Knicks met their match with Miami’s defense, coached by Eric Spoelstra. With Thibodeau, NY has now joined Miami as one of the best defensive teams in the NBA. The Miami defense did a good job keying on Julius Randle, who had a rare off game — 4-18 shooting (1-7 from 3) for 12 pts, 8 rebounds, 3 assists, and 2 steals.

Miami denied alley oop slams to Mitchell Robinson too — he had 2 pts on 1-2 shooting with 7 rebounds in 29 minutes.

The Knicks rivaled Miami’s defense, and the game went back and forth all night.

What a first half pic.twitter.com/56qYR9Ehfg

Hard to win a game when both teams are playing with the same level of intensity and defense, yet one goes to the line so many times.

Elfrid Payton had another strong performance — leading the Knicks from the gate and finishing 8-16 (1-2 from 3) for 18 pts, 5 rebounds, and 4 assists.

NEVER GIVE UP ON THE PLAY pic.twitter.com/KjMzm03A7s

This is how you move the ball pic.twitter.com/uCrgncYAYb

One of the enchanting things about the evening were the Miami “Vice” ‘city’ uniforms, which have been made to match the colors of the court (or vice versa) — various shades of pink merging into various shades of blue. Some viewers liked it; some thought they were seeing things. It was like Miami made the uniforms out of the matching drapes in a Sound of Music kind of thing. Or they were trying to camouflage the Miami players so the Knicks couldn’t see them. Funny and pretty at the same time — I loved them (and the matching court). The Knicks were wearing their ‘City” black uniforms which are also terrific. It was unmistakable who was on what team, unless you were color blind or couldn’t see the Miami players due to the camouflage. 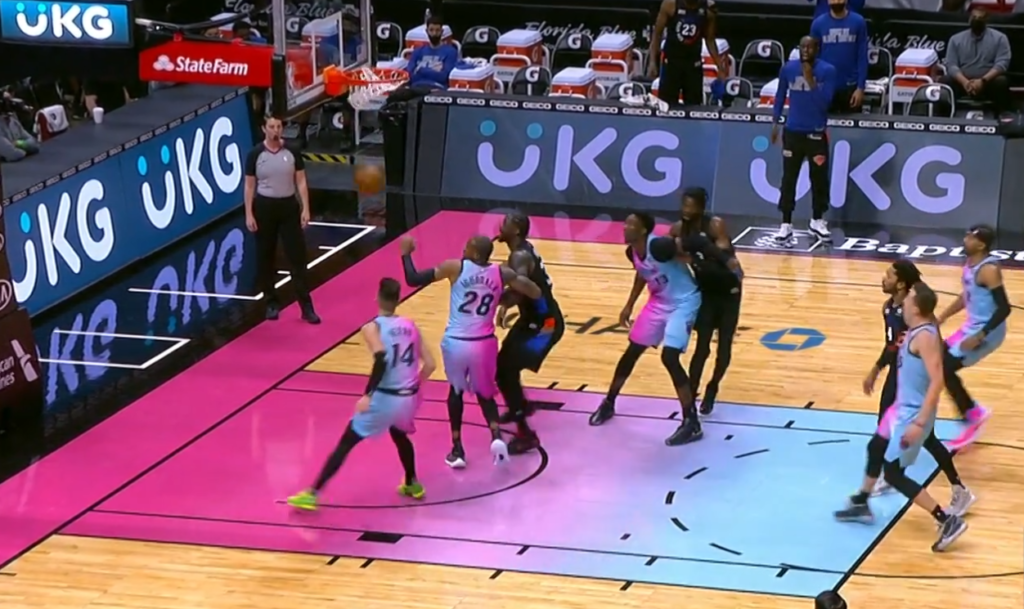 Jesus Christ did the Knicks SQUEEZE this one out. Up 17 with 9:21 left the Knicks scored only 2 points in the next 6 minutes as the Celtics whittled their lead down to 2 points […]

In a season where the Knicks continue to one-up themselves in ways to blow wins — NY told itself to “Hold my beer” and performed the most draw-dropping blown win of them all. The Knicks […]