Jalen Brunson came down court after a missed Toronto jumper — with 5 seconds left in OT and no time outs — Toronto up by 2 — and shot an in-rhythm 3 for the game. It rimmed off.

On a Monday afternoon — Martin Luther King Day — at MSG.

Earlier, at the end of regulation, RJ Barrett got the ball after a missed Toronto free throw and came down court with 5 seconds left — and went all the way to the hole for a SLAM to tie the game at the buzzer and send it into OT. There were .8 seconds left but Toronto did not get a good shot off to end regulation. 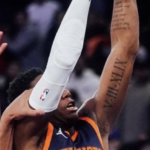 Replays showed RJ was also fouled on the play by Scottie Barnes — which means he should have had a free throw to win the game. The picture of Barnes with his hand firmly on RJ as Barrett slam dunked the ball became the talk of Knicks Twitter afterwards.

“I know it would be a challenge,” said coach Tom Thibodeau afterwards. “It was a hard fought game. Physical. I liked our defense for the most part. The free throws hurt us. We out-rebounded them but we gave up timely ones late. It’s hard to tell what a foul was.”

This was a game of two good teams going after each other with haymakers all afternoon. The two teams were testy with each other on the court — said Walt Frazier and Mike Breen reporting courtside.

Toronto came out with a vengeance — and took an early 9-pt lead in the 2nd quarter. The Knicks were coming off a back-to-back, having beaten Washington the afternoon before. But the Knicks matched Toronto’s intensity and came back to tie the game and take a 59-56 lead at the half.

2. Barrett Dominant in 4th and OT

RJ Barrett not made the shot of the night with the full court slam to tie it near the buzzer in regulation, he dominated for the Knicks in the 4th quarter and Overtime — with strong moves to the basket for scores or fouls, and hitting almost all his free throws. He finished with 32 pts on 10-23 shooting (2-9 from 3; 10-11 in free throws), 7 rebounds, and 2 assists.

The game featured Jalen Brunson vs Fred VanVleet — two guards who mirror each other in size, skill, toughness, and ability to come up with big plays in the clutch.

Julius Randle was matched against Pascal Siakam — and the two played evenly. Earlier in the season Pascal scored 52 on the Knicks to lead Toronto to a win; in their last matchup, the Knicks held Siakam down and beat Toronto.

😤 Ju with the Emphatic SLAM pic.twitter.com/UFkgs6ZOiC

Last year’s Rookie of the Year Scottie Barnes was a tough cover, and hurt the Knicks in this game — he was constantly operating in the lane and either getting fouled or handing out assists. Barnes had 26 pts in 45 minutes on 8-16 shooting (1-2 from 3, and 9-13 in free throws) with 7 rebounds, 4 assists, a steal and a +8.

The testy play between the two escalated late in the game and was caught in a tweet that went viral — Barnes telling Grimes “You’re not him.”

Looks like Scotty Barnes is saying “You are not him” to Quentin Grimes. pic.twitter.com/7ei5xzQDBm

Mitch ain't having that 🚫 pic.twitter.com/loIQJuDjR5

In the second of back-to-back games both in Chicago, the Knicks BLEW OUT the Chicago Bulls in the 3rd and 4th quarters to sweep the 2-game ‘series’, winning this time 114-91. NY was up by […]

The Knicks were down 18 in the first half, and then got to work. Elfrid Payton and Julius Randle took over offensively midway thru the 3rd, the Knick defense kicked in to an elite level […]

Alec Burks shot lights out in the 4th quarter, and played his “poor-man’s Kobe Bryant” game — tremendous defense, and stealing the ball on key plays — to lead the Knicks to victory over a […]