The Philadelphia 76’ers had a Process. The Knicks have a Plan. And they are executing on that plan — despite the media smashing them relentlessly all summer into the Fall. Here is the plan as we see it — a 4-point plan:

The Knicks currently have the youngest team in the NBA.

The Knicks were crucified this summer for not signing elite Max free agents like they said they were. Two points here:

Media has it that the Knicks should have still used their 2 Max salary slots to sign other elite stars. Who?

Instead the Knicks played it smart with a “Money Ball” free agency, signing lesser stars such as Marcus Morris and Julius Randle to 2- and 3-year contracts with club option for 2nd year — essentially 1- and 2-year contracts.

This keeps them in perfect cap position for the upcoming summers — when greatest-player-of-all-time types Anthony Davis (who will be 27 in summer 2020) and “Greek Freak” Giannis Antetokounmpo (who will be 26 in summer 2021) become free agents.

Anthony Davis, who demanded a trade to LA or the Knicks, famously cautioned to not be so fast in thinking he’ll resign with the Lakers, although one would assume they will do everything in their power to resign him since they gave up so much to get him.

Elite Free Agents DO Want to Come to New York

Some say “Greek Freak” Giannis Antetokounmpo would never come to the loser Knicks. That no elite free agents would sign with NY. That’s just fake news and narrow-minded analysis:

If the Knicks can establish themselves as a team on the rise, there is no question Greek Freak would entertain coming to the Knicks. Which is why the next part of the plan is so important.

The first two parts of the plan (above) are in place; the Knicks must now develop a winning culture. That is why they did the “Money Ball” free agency to bring the (young) veterans like Marcus Morris and Julius Randle in (along with 3-pt shooters like Bobby Portis and Wayne Ellington).

The Knicks need to start Winning now. 35 wins this year. 40 wins next. A team on the rise.

And this is why the PRESSURE is on David Fizdale the coach. 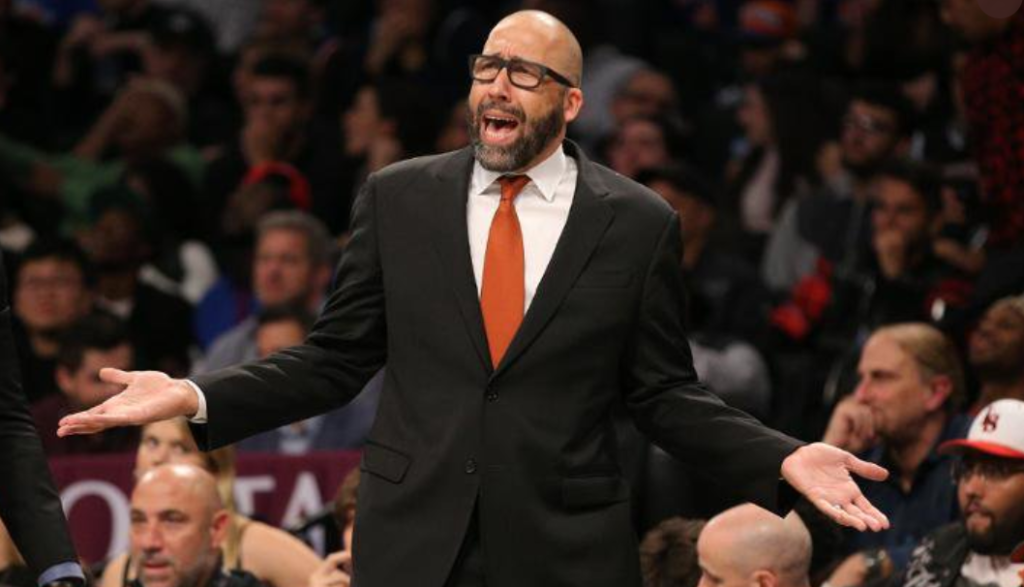 Sometimes a coach is only good as his assistant coaches (see Doc Rivers with Tom Thibodeau his defensive assistant coach and secret sauce to the 2009 Celtics title), and Fizdale has two with great reputations in Keith Smart and Mike Miller.

This summer, the Knicks promoted Miller from Westchester to Fizdale’s assistant coaching ranks. Miller led the Westchester Knicks to the playoffs the last two years, and won Coach of the Year in G League in 2017-18. So Miller is there not only to help as an assistant coach, but probably as an insurance policy as well. If Fizdale fizzes, Miller may take over this season. (A contingency plan within the overall plan.)

This part of the plan is done. New York City is the place where.

This doesn’t seem like part of a plan — but it was for the Nets, who moved from New Jersey to Brooklyn as part of their plan for increased attendance. Most owners of NBA clubs wish they could move their team to NYC. The Knicks were blessed with this advantage as a birthright, and it is an important advantage for them — even if people say it doesn’t matter anymore with global endorsements and communication.

The Garden ROCKS like a playoff game for regular season games — not just the one with Porzingis the other night — think back to the end of last season when the Knicks — the 17-win Knicks — won a game in the last week — the Garden was ROCKING like a playoff game. The celebrities are on the sidelines. The atmosphere is stratospheric.

This part of the plan interweaves with point 2 of the plan above. Being in NYC will attract the elite free agents, if you can execute #3 above.

Everyone Should Have a Plan

Everyone should have a plan as good as the Knicks plan above. Examine your work, and your life, and your financial situation. Lay down a 4-point plan. Then execute.

The Knicks have a plan. And they are executing.

Is there such a thing as a disappointing win? A win is a win. Unless somebody got injured and nobody got injured in this game. And yet — this 107-103 victory over Chicago seemed like […]

The Knicks started off their tough 6-game, near-end-of-season, West Coast trip by taking care of business in Houston, drubbing the horrid Rockets from start to finish. Julius Randle led the Knicks with another MVP-esq performance […]