The Knicks survived a 3-point war in regulation and took command in Overtime to beat Charlotte 118-109 at Madison Square Garden on a Saturday afternoon, putting the ball in Miami’s court for 4th place in the playoff standings. Alec Burks and Julius Randle led the way in OT — Burks playing point penetrating to the basket and scoring in his poor-man’s-Kobe-Bryant variety of ways.

With the win secured, all of NY spent Saturday evening constantly refreshing their browsers watching the Milwaukee-Miami score or gamecast, hoping for a Milwaukee home win over Miami that would put the Knicks back in the 4th seed, controlling their own destiny where a NY win over Boston on Sunday would seal it.

Milwaukee jumped out to a huge lead from the start, and led by 24 in the 2nd quarter, but Miami kept coming back, eating into the lead, pulling to within 12 in the 3rd — but Milwaukee hung on to win sending Knicks Twitter into JUBULIATION at 10:30 pm in the evening.

Details on this game:

Charlotte takes a lot of 3’s. On the evening they took 49 of them, out of 102 shots. They finished 13 for 49 from 3 (26%). In the first half of this game, the Knicks defense got out on the 3 and Charlotte missed a lot — the Knicks had a more conventional attack and took a 9-pt lead at the end of the quarter.

Reggie shot a perfect 4-4 from distance in the first. pic.twitter.com/dq9f3BzzEE

Immanuel Quickley and Obi Toppin hit back-to-back 3’s in the 2nd quarter to open up an 18-pt advantage for NY. The Knicks ended this game 16-37 from 3 — 43%; coming in the Knicks were 3rd in the NBA in 3-pt percentage.

🌹 on a frozen rope to Quick pic.twitter.com/eY96taGn9R

But then Devonte Graham went on a 3-point BLITZ, hitting 4 (four) 3-pointers in a 2-minute span midway thru the 2nd and Charlotte was right back in the game, 53-44.

Graham took a 3 and was fouled, then made 3 free throws to pull Charlotte to within 58-50 with 2:31 left in the half. Only a Julius Randle 3 with 2 seconds left enabled the Knicks to carry a 9-pt lead into the lockeroom.

At the start of the 3rd, Randle, Elfrid Payton, Reggie Bullock, and RJ Barrett scored and Nerlens Noel went on a Shot Blocking Spree to get the Knicks lead back up to 17 midway thru the period. Noel had 5 blocks on the game (8 pts, 11 rebounds, and a +11).

Nerlens did all of this in a two-minute stretch. pic.twitter.com/mS4qDnPEpo

But then Miles Bridges went into Revenge Game mode — revenge for the Knicks picking Kevin Knox over him in the 2018 draft, it appeared. Bridges scored 10 straight points for Charlotte — a pair of 3’s and some viscous slam dunks to pull Charlotte within 8.

Derrick Rose scored 7 straight points for the Knicks at the end of the 3rd — but Bridges wasn’t done — he answered Rose with two more viscous Slam Dunks — the last one pulling Charlotte to within 3 to end the 3rd.

Charlotte scored the first 7 points of the 4th quarter and when Devonte Graham hit yet another 3 with 10:32 left Charlotte was up by 4 and this one looked like it might slip away.

Coach Tom Thibodeau called time out. He replaced Derrick Rose — who had been scoring well but he may not have liked his defense on Malik Rose or Graham (and plus Rose had just missed the previous game with a slight ankle sprain), and went with Alec Burks at the point, and Immanuel Quickley at shooting guard, with Randle, Reggie Bullock, and Nerlins Noel.

And that team was able to lay a Defense against Charlotte and their 3’s that held the Hornets scoreless for over 4 and a half minutes — from 6:45 left (and Charlotte up by 4) to 2:09 left (with NY up by 4). In between, Julius Randle stepped up with a 3 and a 2-pt bucket to bring the Knicks back into the lead.

Terry Rozier made 2 big buckets in the last 2 minutes to tie the game and that was that — both teams played a good D to turn the game into a defensive struggle all of a sudden.

At the end of the 4th Burks was forced out trying to contain a loose ball, but no foul was called on the Hornet player — causing a lot of pissed of fans on Knicks Twitter, and giving Charlotte another chance to take a lead . But ball don’t lie — Devonte Graham MISSED a 3 with 2 seconds left to send the game to OT.

In OT, Alec Burks and Julius Randle and a 3 by Reggie Bullock gave the Knicks a commanding lead from the get go — they outscored Charlotte 14-5 to take the game and send all of NY into the evening prepared to watch the Milwaukee-Miami game on their cell phones (or NBA tv if they had it). 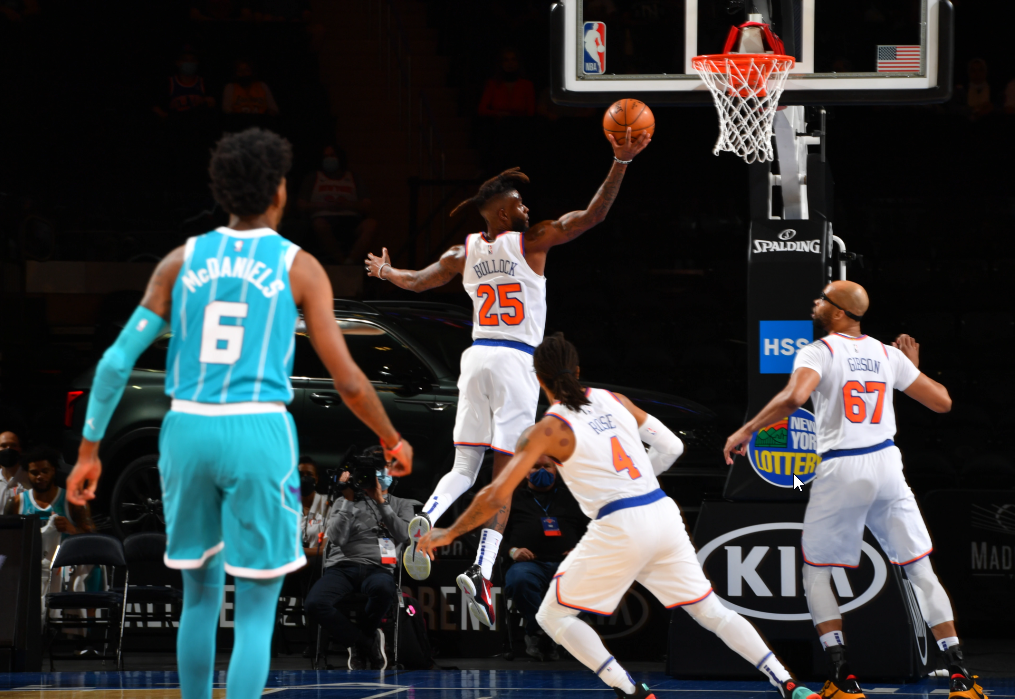 The Denver Nuggets blew the Knicks off their own Madison Square Garden court on a Saturday matinee game — just as they’ve done time and time again in the recent past. NY couldn’t defend the […]

In the second game of a back-to-back on the West Coast, the Knicks couldn’t get it done against the 5-10 Sacramento Kings on a Coronavirus Friday night in Sacramento. The Knicks had just beaten Golden […]

RJ Barrett got the ball with 1.5 seconds left in a tie game and banked in a 3-pt jumper from right side while heavily defended and falling away – a miracle shot that caused Madison […]