Terrence Ross got on a ROLL and scored 22 points in the 4th quarter — his only points of the game — to carry Orlando to an upset win over the Knicks at Madison Square Garden on a Sunday night. Cole Anthony also had a marvelous game — with 29 points and 16 rebounds to help Orlando. NY had slaughtered Orlando Friday night in Orlando — leading by over 30 most of the night — and led in this one by 6 points entering the 4th quarter.

Ross was getting revenge over not necessarily the Knicks but the Orlando Magic Twitter account, which made fun of the Magic getting CRUSHED by NY the two nights earlier in Orlando. After that game, the Magic posted a picture of a car veering off a highway exit — with a sign in front that said “Check the Final Score” and the sign for the exit saying “Make Other Weekend Plans”. Terrance Ross asked Orlando to delete the post. 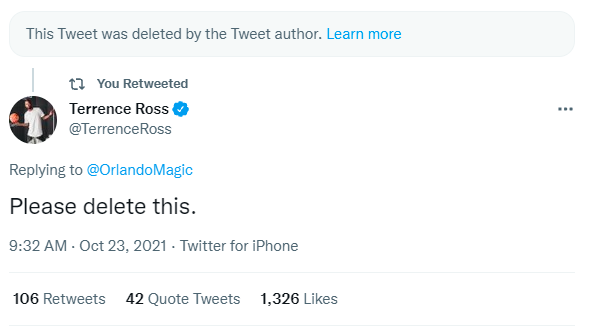 Cole Anthony might have been getting revenge also — trying to show the Knicks what they passed up on when they chose Obi Toppin over him in the 2020 NBA draft. More on that below.

1. Ross a Scoring Machine When He Gets Started

Knick fans know that when Terrance Ross gets on a roll, he becomes a scoring machine — one of the best scorers at shooting guard in the NBA today. He has killed the Knicks in the past. A look at his career stats surprisingly show he only averaged 15.6 ppg last year — a career high although he’s been around that mark the last 3 years. Based on game he’s had vs the Knicks you might figure it to be 22 a game. He is 30 years old.

But when he gets on a roll…

2. Anthony Proving Himself Too

Cole Anthony was coming off two poor performances and generally has been trying to prove himself to 14 teams after being drafted 15th in the 2020 NBA draft. He had been one of the most ballyhooed High School players in the nation in years. The Knicks picked Toppin at #8 overall, skipping Anthony, a local product who is the son of former Knick Greg Anthony on top of it.

Anthony has been showing a lot of teams what they passed up on — he had a good rookie year last year, averaging 12.9 pts and 4.1 assists in 27 min a game.

Anthony lit up the Garden up from the beginning with a 3-point barrage. The 6’2 Anthony finished with 29 pts on 9-16 shooting (5-9 from 3) and an astounding 16 rebounds. He was active and all over the place.

The Knicks who had shot lights out on Friday night from 3, had trouble making 3’s in this game — and weren’t able to withstand the Ross 4th quarter barrage.

Orlando threw a zone at the Knicks in the 2nd half, and that seemed to throw the Knicks as they weren’t getting the penetrations/kicks. But NY also missed some wide open three’s.

“We can live with missed shots. It’s the defense, rebounding, and playing tough for the league,” said coach Tom Thibodeau afterwards. “You can’t let your guard down. When you have a lead, you have to play with toughness. Usually this team does. We have a great group of guys; we’re disappointed with the way we played; but we have to do a lot better; all of us.”

Randle worked inside well, finishing with 30 pts on 8-24 shooting overall, 16 rebounds, and 3 assists.

Mitchell Robinson had injured his ankle in the 1st half and limped off the court which caused some alarm on Twitter — but he came back into the game and played 33 minutes, finishing with 10 pts (on 4-5 shooting), 10 rebounds, and 3 blocks before fouling out. Afterwards, he said he was fine — just tweeked the ankle a little bit.

You look at the final score and you think the Knicks got torched by 16 points — but the Knicks were leading this game with 9 minutes left, and had full momentum. With 5 minutes […]

The Knicks clamped down on the Indiana Pacers in the 4th quarter to win going away, 92-84, on a Monday night at Madison Square Garden. NY did not allow the Pacers to score a basket […]

Alec Burks came off the bench for 30 points, including huge buckets at the end, to lead NY to a 102-98 victory over San Antonio on a Thursday night at Madison Square Garden. It kept […]