And we just gave GM Scott Perry an A on our mid-season report cards. Everything’s different now when discussing the Knicks management after an article surfaced in the NY Post that provides alleged behind-the-scene details of how the Knicks are being run — and show that Scott Perry has little-to-no say.

Instead the strategy for the franchise is being laid down by VP of Strategy Brock Aller, with animated input from “World Wide Wes” William Wesley and coach Tom Thibodeau. All of them hired by Leon Rose, the head of basketball for a year now — who is otherwise hand’s off but has them banging heads to provide him with key decision advice.

The article is written by Yaron Witzman, who is not a NY Post reporter — the Post published his article, and in a tweet he thanks them for publishing it. The article doesn’t exactly make the Knicks management team look good — they do not come across as cohesive and strategic — but rather three dueling personalities banging heads to convince Leon Rose to get their way.

The one person the article never mentions is Scott Perry. Not a single mention.

Not only does that provide strong evidence that Scott Perry has little decision-making duties, but as Fraud Investigator and Attorney Jake Andrews points out, it means Perry was probably the source for the article. Andrews points out that:

According to the article, coach Tom Thibodeau initially wanted to flip RJ Barrett & Mitchell Robinson for seasoned veterans, and he wasn’t sold on Julius Randle. The article states that a former colleague of Thibodeau said, “There’s no rebuilding or long term with Thibs,”

Thankfully, it looks like Thibs has changed his mind on all three as the season has progressed.

Brock “Who?” Aller = VP of Strategy

The article says that Brock Aller is an opposite voice to Thibs — Aller is the one who wants to build long term. Aller “thought the Knicks should target second-tier veterans like Austin Rivers and Alec Burks with one-year deals — and then during the season try flipping them for future draft picks.”

As Marc Berman of the NY Post wrote in April 2020 when Aller was hired, Aller was previously the financial planner/capologist for the Cleveland Cavaliers. In 2017 Dan Gilbert the Cavaliers owner said Aller “is probably one of the finer capologists in the league. He knows more about the cap than probably PricewaterhouseCoopers knows about the IRS code. He lives with the cap, with the collective bargaining agreement. He comes up with ideas on things that the league has never heard of, they have to go into their committees to check if it’s OK or not. He’s sort of a savant with this.”

Witzman starts the article by revealing it was World Wide Wes who pushed the Knicks to draft Immanuel Quickley out of Kentucky. It is noted that Wesley has extremely strong ties with John Calipari of Kentucky, and also has a strong bias to Kentucky players. The Knicks are now littered with former Kentucky players — signing Nerlens Noel this off season, adding him to Kevin Knox and Julius Randle who were brought in by the previous regime under Scott Perry and Steve Mills.

The article reveals Wesley had been pushing for the drafting of Quickley for months. Witzman provides inside information on how it went down in the room when the Knicks were drafting:

Clearly someone “in the room” (Scott Perry as Jake Andrews suggests?) provided those details.

With Aller chiefly a financial wizard of the NBA cap, and Wesley an agent — or as the Witzman article calls him, a “ubiquitous consultant/adviser/star-whisperer/power broker whose reputation has earned him the moniker ‘World Wide Wes'”, and Thibodeau the coach, and Leon Rose, in charge of it all — a former Agent — you might ask: who is making the talent calls? The requirements and requests seem to come from Thibodeau — a direct Coach-to-VP-of-Strategy relationship, with input on talent from the power-broker Wesley and his sources like Calipari. That makes a GM like Perry superfluous. As is said in the article, Wesley stated loudly on draft night, “Coach says we need shooting, Quickley’s the best shooter.”

But as the Witzman article points out, “The Knicks entered the offseason with more than $40 million in cap space, one of the largest numbers in the league.” It was Scott Perry (and Steve Mills?) who got the Knicks into this splendid position. It was Scott Perry who did a “Money Ball” Free Agency during the summer of 2019, that netted Julius Randle and a host of other ‘value’ players like Elfrid Payton, Marcus Morris, Reggie Bullock, and Bobby Portis at club-friendly 1- and 2-year contracts with club option for an additional season.

Perry (and Steve Mills) got the Knicks Julius Randle, and RJ Barrett (through luck of the draft and a miserable season), and Mitchell Robinson (a steal of a pick), and Quickley (signing Morris then dealing him for the Clippers’ late first-round pick). So we STILL give Perry an A on the 2020-21 mid-season report cards.

Addendum to this article. On March 15, 2021, while the Knicks were playing Brooklyn at Barclay’s, Adam Zagoria posted this picture off the tv: 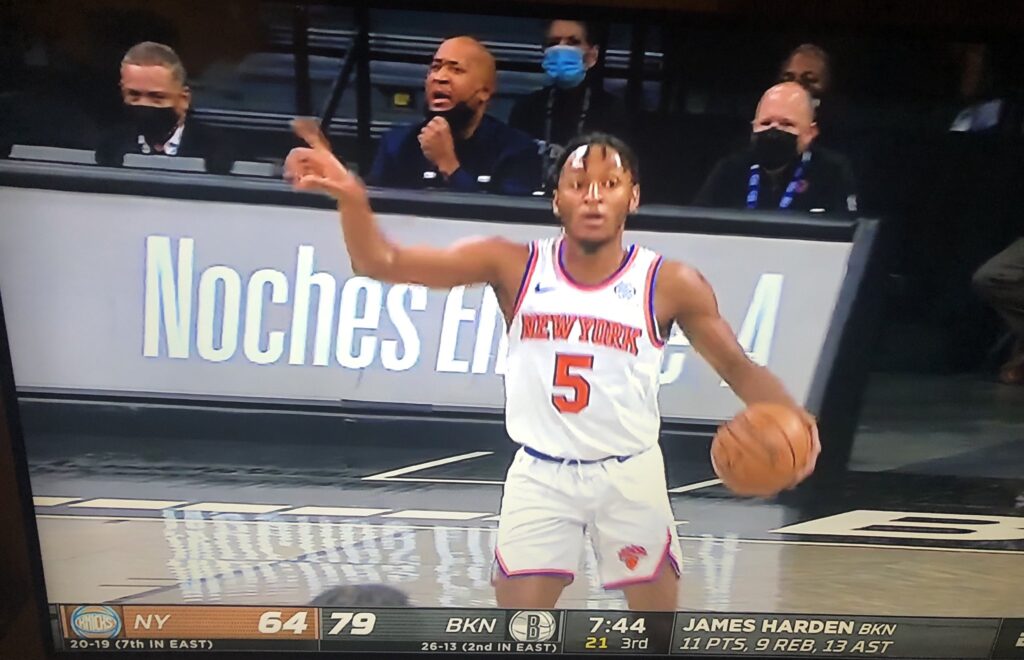 This is a significant picture because:

It may mean that the senior management team feels

We’ll find out as the future unfolds.

The Knicks knocked on the door of challenging the championship-caliber Bucks in the first half, but Milwaukee ran off 18 straight points in the 3rd quarter to quash any notion of that happening. The Greek […]

Julius Randle played like an All Star in carrying the Knicks to a 116-114 victory over the 41-14 Golden State Warriors in San Francisco. Randle had 28 points, 16 rebounds, and 7 assists and the […]

One wouldn’t think it in retrospect based on what the Knicks eventually did — but draft night 2022 was a CRAZY, ROLLERCOASTER night for Knicks Twitter. Going in the rumors swirled heavily that NY was […]