One wouldn’t think it in retrospect based on what the Knicks eventually did — but draft night 2022 was a CRAZY, ROLLERCOASTER night for Knicks Twitter.

Going in the rumors swirled heavily that NY was going to trade up in the draft from their #11 spot to Sacramento’s #4 so they could pick elite point guard Jaden Ivey. Ivey was the talk of Knicks Twitter for the Month beforehand and as draft night got closer, it was reported other teams were interested in trading for the #4 pick to get Ivey as well.

Knick fans speculated what they would need to give Sacramento — their #11 plus probably one of their young stars — Immanuel Quickley, Obi Toppin, and/or Quentin Grimes, plus at least another 1st round pick the Knicks have stashed over the next few years.

Then rumor circulated the day before the draft that NY was also talking to Detroit to trade up for their #5 pick. What did this mean? That Sacramento might not pick Ivey and he’d fall to #5? As draft hour approached, the rumor from Woj was that Sacramento would wait to be on the clock when they would examine their final offers and make a trade.

Finally, Sacramento was on the clock — and — they picked Keegan Murray — announced seconds beforehand as usual by Woj, who stated they would be keeping the pick. Next up — Detroit. And THEY picked Jaden Ivey. Now Knicks Twitter knew why all the rumors were flying about the Knicks talking to Detroit. The draft continued.

Finally at #11 the Knicks picked… Ousmane Dieng, a 6’10 French forward. Knicks Twitter immediately BASHED the pick. But even while people were still tweeting what a terrible pick it was — they hadn’t looked down because the Knicks traded the pick (within seconds) to Oklahoma for several future (highly protected) first round picks!

The Thunder will send multiple first-round picks to New York, per source. https://t.co/kXfkvJDKbI

All Hell and Confusion

Knicks fans were still digesting this — that the Knicks were accumulating 1st round picks for a Big move — when Charlotte picked at #13 — and all hell (and confusion) broke loose. Shams reported that Charlotte had picked Jalen Duren — a 6’11 forward out of Kentucky — and traded him to the Knicks! Simultaneously, Woj reported that Duren had been traded to Detroit!

The Pistons are acquiring Jalen Duren at No. 13 in a trade, source tells ESPN.

For the first time in history — Woj and Shams were reporting two completely different things. Knicks Twitter was in a twatter — was Duren a Knick or knot??? This caused confusion for at least 10 minutes before Shams cleared it up:

Knicks acquired Jalen Duren — and moved him with Kemba Walker to the Pistons, sources said. https://t.co/kzyljkrFnI

Still for at least a half hour Knick fans were asking questions — WHAT #1’s did NY get? What was the plan?

There HAS to be a plan

It soon became apparent they were trading back from their #11 pick in order to get Detroit to take Kemba Walker‘s salary to free up free agent money for the summer — meaning the Walker signing was still hurting them. And there would be no young point guard drafted — instead NY was apparently doing all this to sign Dallas point guard Jalen Brunson. Knick Twitter reactions:

Or as Alan Hahn summarized later, “Basically the Knicks now own five first round picks in 2023. And opened up cap space to sign a free agent this July.”

I was sitting on the steps of the Civil War Museum in downtown Winchester, Virginia — there for work — watching this all unfold on my cell phone. And if you don’t think all of the above was the most funnest roller coaster ride — what an evening. At one point this big burly guy in a suit about 55 years old walked up to me and offered out a tin-foil pipe with marijuana in it — said he thought I needed a hit. I said I was fine. He was drunk and we talked for a few minutes. Terrific guy he said he had to go into one of the local bars and pick up his daughter who worked there as a waitress. 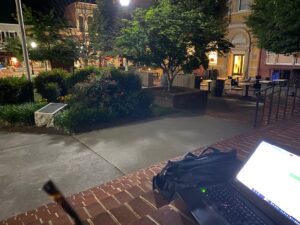 Right After 1st Round Ended

After the Knicks made their selection and trades, and the craziness started to die down — some Knick fans (like me) turned to the Yankee game — where they were dead in the water all night trailing the Houston Astros 6-3, when Aaron Hicks hit a CLUTCH 3-run homer in the bottom of the 9th to tie it, and then two walks later Aaron Judge walked it off with a rope single down the left field line! WHAT A NIGHT FOR NY SPORTS!

Very quietly, in the 2nd round the Knicks picked Trevor Keels — a 6’4 shooting guard out of Duke whom Ross Kreines said is a “Great value pick by the Knicks. Trevor Keels can shoot the ball, create off the bounce and finish in the lane with contact, tough, will get into and after you defensively, good size and he competes on both ends.”

Great value pick by the Knicks. Trevor Keels can shoot the ball, create off the bounce and finish in the lane with contact, tough, will get into and after you defensively ,good size and he competes on both ends

The next day, it was reported that the Knicks had signed Jean Montero — a highly regarded 6’3 point guard who went undrafted.

Next up comes Free Agency starting Thursday, June 30 at 6pm EST. Going to be crazy!

The Knicks were down 18 in the first half, and then got to work. Elfrid Payton and Julius Randle took over offensively midway thru the 3rd, the Knick defense kicked in to an elite level […]

Well that was easy. It looked like it was going to be real hard at first, but in the end garbage time and a blowout. That was no consolation to Frank Ntilikina who was publicly […]

It was only the 1st preseason game — but the Knicks looked Good. Obi Toppin — the #8 pick in the draft — looked awesome in the 1st quarter when he came in — quick […]