A Sunday afternoon game in Los Angeles on January 21, 2018 against the Lakers was a turning point in Knicks history in a good way — despite the Knicks getting humiliated and blown out.

The 21-25 Knicks coached by Jeff Hornacek were run off the court in the 2nd half by a more athletic Laker team — even though the Lakers were only 16-29 coming in. Knicks President Steve Mills and GM Scott Perry were sitting in the stands watching — and have been quoted several times afterwards that in watching that game, they realized the Knicks needed to get quicker and more athletic.

The primary players who ran the Knicks off the court: Julius Randle and Jordan Clarkson.

Others of note were Larry Nance and Kyle Kuzma. Brandon Ingram was there too although he didn’t have a great game.

After the game, Jeff Hornacek said: “Randle and Clarkson, they were killing us. We were throwing multiple guys on both of them. But they took it to whoever was guarding them.”

A year later, on July 8, 2019, the Knicks signed Julius Randle in free agency. At the time the media blasted the Knicks, reporting that Randle was a secondary free agent target and fallback for the Knicks — even though the Knicks said otherwise — that he was a primary target.

Here’s the Laker side of the boxscore: 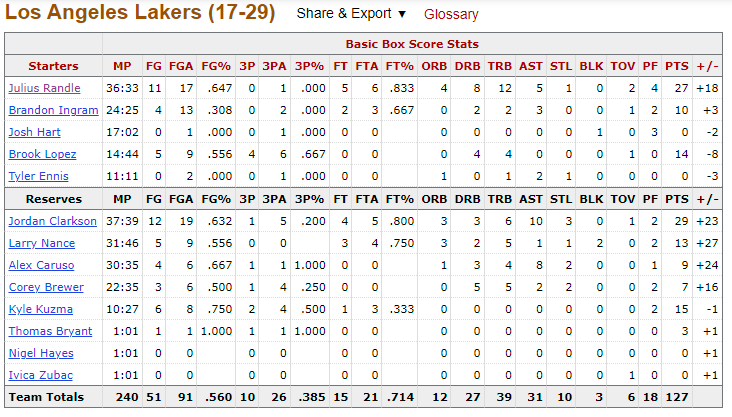 After the game, Knick Tim Hardaway Jr said this: “They wanted it more. We can’t let that happen. It shouldn’t be happening. Both teams should be competing at an equal pace. You’re going against a team that leads the league in pace. They’re that fast and they want to get up and down. You’ve got to be ready for it and we were not ready for it.” 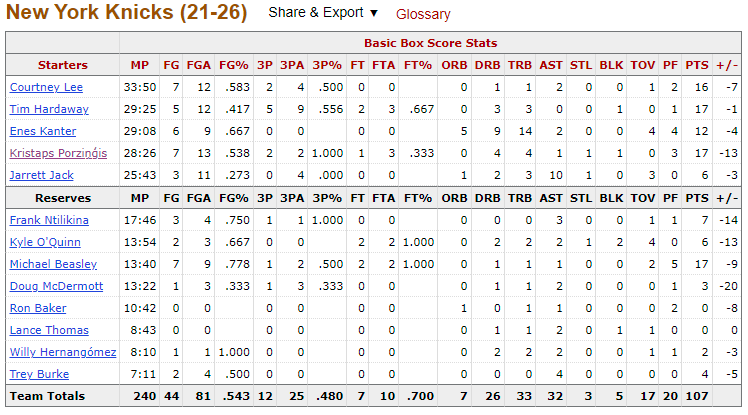 Note on the Knicks side of the ledger, unable to keep up with the fast and athletic Lakers, were Kristaps Porzingis, Enes Kanter, Courtney Lee, Jarrett Jack, Frank Ntilikina (first off the bench), Kyle O’Quinn, Lance Thomas, etc. Tim Hardaway Jr was the only one in the NY boxscore who would be considered athletic by NBA standards. Trey Burke too but he only played 7 minutes and is not tall. That whole team is gone now.

Julius Randle is now an All Star for the Knicks and in process of possibly cementing a legacy as one of the great Knicks ever. That game on January 21, 2018 is what you call, “A good loss.”

We Welcome Your Feedback

The Knicks held a 10-pt lead throughout most of the 2nd half, and a 13-pt lead with 3 minutes left, before withstanding a last minute Chicago surge that got them to within a point — […]

The Knicks ended a 5-game losing streak by RIPPING Boston, start to finish, in Boston on an arena-empty Coronavirus Sunday afternoon in mid January 2021. The Knicks were up by 11 at the end of […]

Elfrid Payton is still a Knick as of this writing. He is the representative example of the up-in-the-air status of the Knicks and the NBA. Elfrid signed a 2-year, $8 million per year contract with […]